The 2015 Health for Haiti crew got an early start and was on the road for Grande Saline by 7am. Team Water left first in the red truck while the rest of us enjoyed a luxurious ride in a new air conditioned (!) bus. TeeJoe’s bus was not up to another rough ride to Grande Saline, but we are all looking forward to seeing him tomorrow. We had a tremendous amount to accomplish today and everyone was ready to get to work.

However, as often happens in Haiti, things did not go quite as we had planned. About 15 minutes away from our destination, we were flagged down by some people carrying a woman on a stretcher. The woman was in labor with her first child and the people asked for us to please help get her to a hospital. It would have taken a long time to get her out to a hospital, but we knew that Dr. Robinson was waiting for us at our destination. So we squished together as best we could and made room for her on the front row of seats. She was in active labor and had a hard time even getting onto the bus. Her uncle, mother and two sisters insisted on coming with her, so they squeezed in as well. The woman’s water broke shortly after we got her onto our bus. Nancy stood next to the woman and tried to assist as we slowly bumped along the road. We were able to find some gloves for Nancy in the clinic bag, but she had one of the translators tell the woman to keep breathing but do not push!

Team water was already working on the water system at the container, about a half mile up the road. They lost an entire day of work yesterday because the red truck was broken.  Team Solar also had a tremendous amount of work to do, so they regrouped on the other side of the chalk board and tried to concentrate on their jobs. If you have ever tried to work in the same room where someone is having a baby, you will understand that this was a challenge. Although the drill and generator drowned out some of the yelling, we were all pretty anxious for the young woman and her baby.

I am happy to tell you that although it was not easy for her, she gave birth to a healthy baby boy! It was a good thing that we made it to Dr. Robinson. There were some issues that would have made it very difficult and dangerous for the woman have the baby on the road. The new mother gave us permission to share some pictures of the baby with you, so please enjoy! Dr. Robinson stitched the woman up and we all enjoyed seeing the beautiful new baby. The experience was something none of us will forget, but it was extra special for the students who were able to assist Dr. Robinson with the birth.

All the while this was happening, Alison, Iyan and Esterling were on the roof mounting the rails for the solar panels. Rachael, Emily E. and Kayla were running wire and preparing brackets and carrying solar panels back from the container where we had locked them up Thursday. Jean and Emily C. held some lessons for the kids from the Grande Saline computer school. The students at George F. Johnson Elementary School in Endicott, NY raised money to purchase a couple of digital cameras for the kids in Grande Saline. They hope that the kids in Grande Saline will take some pictures and communicate with them over the Internet. Jean and Emily taught the kids how to use the camera, remove the SD card, put it in the computer, and transfer the pictures to the computer. We also gave their teacher, Tida, ten laminated hard copies of the BDDP instructions for using PowerPoint which had been translated into Creole by superstar Haitian SUNY Broome student, Shaina Louis.

Meanwhile, work continued on the water system, the solar power, and clean up of the “delivery room”.  After a couple of hours, Dr. Robinson drove the new mother home in the red truck and Professor Hankin and the clinic students set up for a couple hours of clinic. Some of the students enjoyed playing with the children in Grande Saline, and Alison, Iyan and Esterling were STILL on the roof.

By the end of the day, many patients had been seen, Jean Frico road a horse, and: WE HAD SOLAR POWER in Grande Saline!!!! Thanks to Dr. Gay and the students, we did it!!  The water team (Jodi, Paula, Tom, Nick and JJ) made a lot of progress but had lost too much time to get the system functioning and properly train the operators. It is critical that the system be maintained, so the team decided that the installation would have to be completed on a second trip to Haiti. We are very proud of the tremendous progress that we made this week under some very difficult and unexpected conditions.  Jodi, Paula, Tom, Nick and JJ worked incredibly hard and had such a positive and upbeat attitude, it was inspiring. We will make plans for “Phase II” and continue our efforts to bring clean water to the people of Grande Saline.

We finally headed for home, confident that our bus and truck would not break down.  On our way out of Grande Saline, we passed a funeral, at about the same spot that we picked up the pregnant woman this morning.  There were so many people, all dressed in their best clothes, a brass band, and four men dancing back and forth across the road with the coffin. It was certainly a celebration of the person’s life. I think we really did see just about everything today!

I wish I could say the ride home was uneventful, but it wasn’t.  There was an accident in Saint Marc’s and traffic was stopped.  Our driver somehow managed to turn around, and JJ did the same with the red truck.   We flagged down a passing motorcycle to ask how to get out of there.  The guy on the motorcycle said he could get us past the accident and back to the main road…while others standing around disagreed.  We decided to give it a go and followed as the guy on the motorcycle led us down a side alley. I guess we were on “roads”, but it was not an easy ride.  After about 40 interesting minutes we did finally make it to the real road and got back on track. So, it was another late night for us, but we are all safe and sound and tired at the Guesthouse!

I was going to try to organize my categorize my pictures, but I decided to leave them in the order I took them…it will give you an idea of how many things we had going on at once today!  A few of these (the best ones) were taken by Heather. 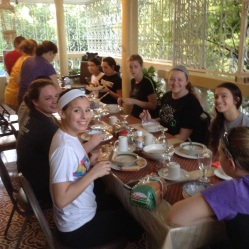 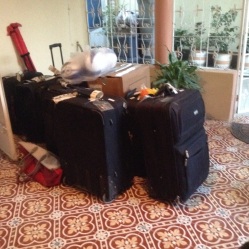 Crowded on our new bus. 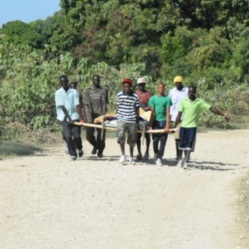 This was the woman in labor. They had been walking for over three hours when we saw them. 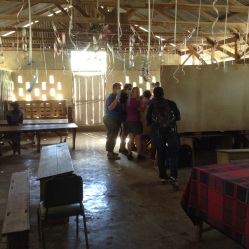 Setting up a delivery room. 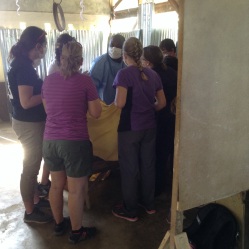 Getting ready for the birth! 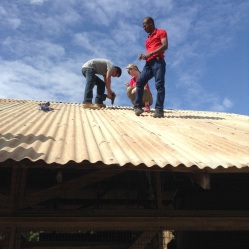 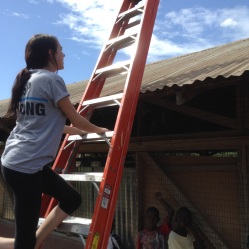 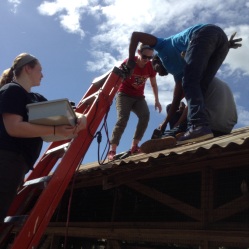 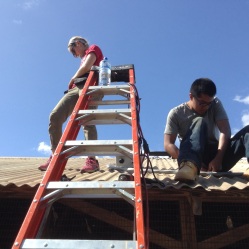 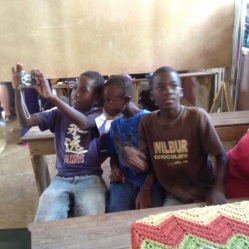 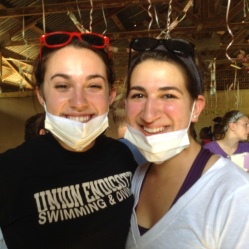 Dr. Robinson and the new baby. 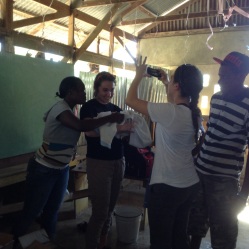 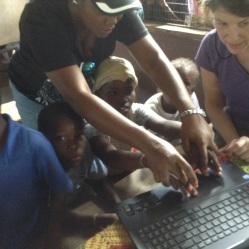 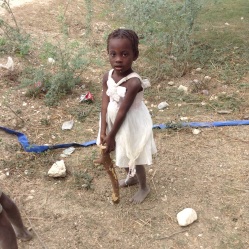 Thanks for getting our container to Grande Saline, Geodis!!

Jodi works on the water system. 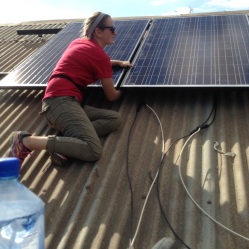 This metal roof was hot! 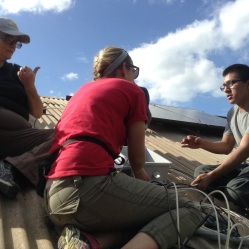 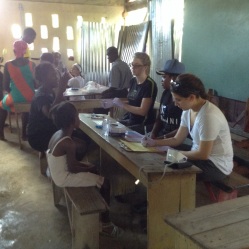 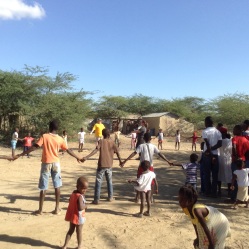 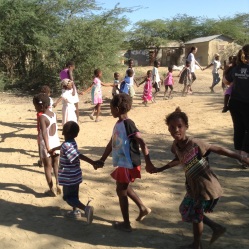 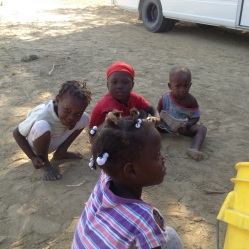 Glasses at our clinic. 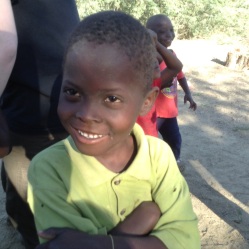 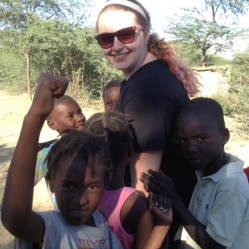 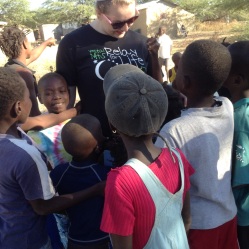 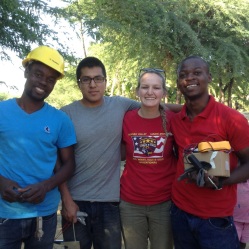 These guys were working on a hot metal roof for about 4 hours! 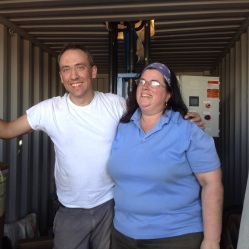 Thank you Jodi and Paula! 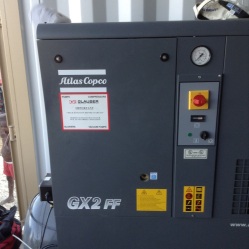 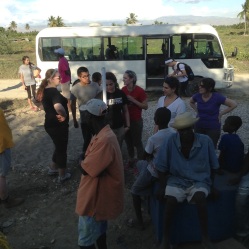 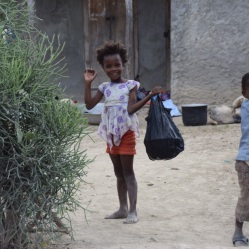 A funeral approaches on the road out of Grande Saline.

Jean Frico rides into the sunset.

← Haitian History and New Friends
A Day of Peace and Rest →

1 comment for “A new baby and solar power for Grande Saline!”

The water filtration system in Grande Saline provides thousands of gallons of clean, safe drinking water to hundreds of families every day. Click the link above for more information about how you can help capture Haiti's abundant sunshine to power this system. 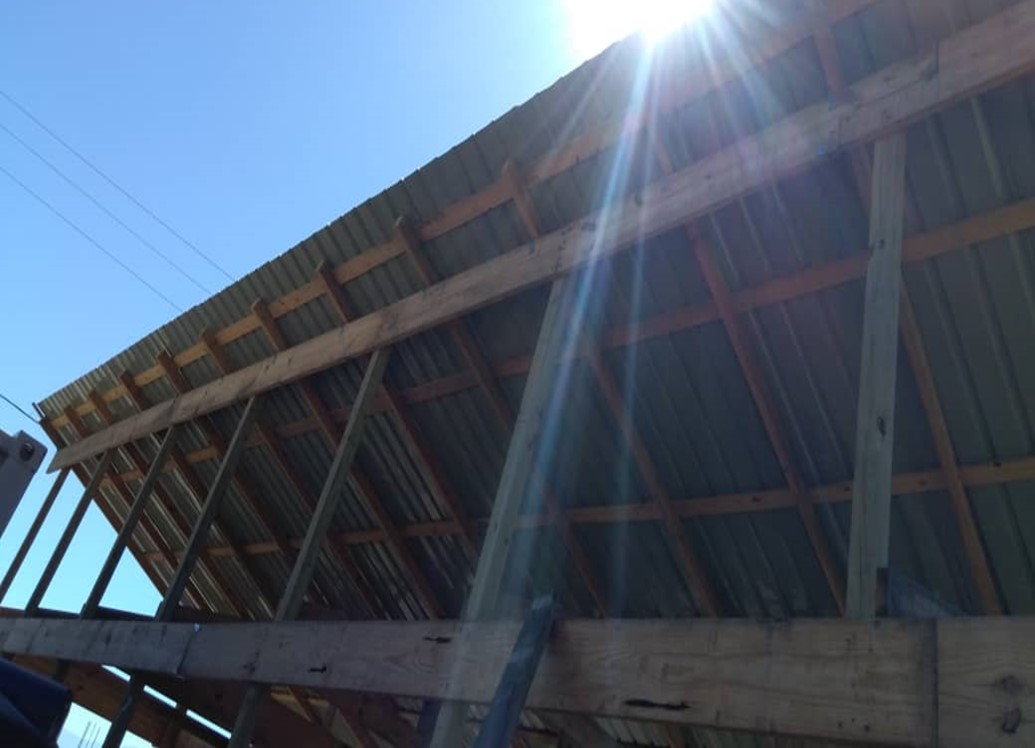